The Emotional Lifecycle of a Disaster 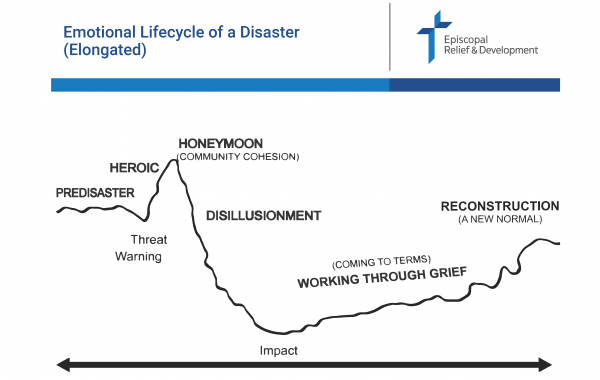 Disasters and mass disruptive events can be extremely unpredictable and chaotic. Even though that is a valid characterization of catastrophe, disaster experts have discerned a general pattern or cycle of phases that a community and the individuals in it go through from the time of impact of a disaster to establishing a newly reconstructed life.

Disaster first-responders and relief personnel of all sorts may encounter very different situations and get very different reactions from the disaster-stricken community, depending on what phase the recovery effort is at in any given moment. A general six-stage cycle has been identified by various organizations. Below summarizes the prevalent emotions, commonly-found behaviors, and the resources which tend to be most important during each phase.

Emotions
Disasters with no warning can cause feelings of vulnerability and lack of security; fears of future, unpredictable tragedies; and a sense of loss of control or the loss of the ability to protect yourself and your family. On the other hand, disasters with warning can cause guilt or self-blame for failure to heed the warnings.

The impact phase, is characterized by a range of intense emotional reactions. The greater the scope, community destruction, and personal losses associated with the disaster, the greater the psycho-social effects are likely to be. As with the pre-disaster phase, the specific reactions also depend on the type of disaster that is occurring.

Emotions
Slow, low-threat disasters have psychological effects that are different from those of rapid, dangerous disasters. As a result, these reactions can range from shock to overt panic. Initial confusion and disbelief typically are followed by a focus on self-preservation and family protection. The impact phase is usually the shortest of the six phases of disaster.

Occurring at the time of impact of the disaster and in its immediate aftermath, the Heroic phase is characterized by a shell-shocked community with emergency needs for food, water, and shelter.

Emotions
Grief and loss are strong at this stage, but so too are emotions of altruism. There is a sense of the heroic, of people responding from the highest, most noble part of themselves to help fellow human beings by rescuing, offering needed supplies, and generally giving the best of themselves to meet dire needs. The firemen who went up into the stricken Twin Towers after the 9/11 attacks in New York. The random guys with boats that decide to save people from rooftops in floods.

Behaviors
The community sees many heroic actions, and much energy goes into saving others’ lives and property, even sometimes before one’s own is looked after. An example of this occurred after both Hurricane Katrina (2005) and also the New Zealand earthquakes of 2010 and 2011, when first-responders, such as the Search and Rescue teams, toiled long hours to rescue and assist survivors even though their own homes had been demolished in the disasters.

Important resources
The family groups, neighbors, and emergency teams on the scene immediately are the most important source of help in the first post-disaster hours.

From a few days after the disaster to about three to six months onward (depending on the disaster), a community tends to be in the honeymoon phase.

Emotions
Survivors — and their loved ones — feel relief at survival, and often there is still an emotional “high” of “I survived. That is what matters. The rest we can deal with." There is a strong sense in the community of having shared a terrible experience and lived through it. Public officials are often praised for their role in saving lives and organizing relief efforts. For agencies such as the Red Cross, Episcopal Relief & Development, and local churches, there often is an opportunity for fundraising. This is because people open their wallets with relative generosity as a result of feeling moved by the intense media coverage of widespread suffering and touching tales of rescue and survival. Survivors experience high expectations about the help that they will get from official and governmental agencies towards rebuilding their lives: partly because many promises are made to them at this stage.

Behaviors
It is often easier to recruit volunteers during the Honeymoon phase than later on, as many people look for ways to help physically, and not just donate material goods or money. The communications task of organizations is to help manage the expectations of all parties: survivors, the community, and general public, about what assistance the congregations or organizations themselves will be able to give. Communications must also help volunteers learn how to give help: what is needed, where, and how to deliver it.

Inevitably, reality sets in. Governments put conditions on the assistance they will give, insurance companies find reasons not to pay out, media and organizations begin to go home, and more. This phase can last from several months to up to a couple of years.

Emotions
No longer the focus of the world’s (or even the region’s) attention, survivors begin to experience a strong sense of anger, resentment, bitterness, and deep disappointment if they now begin to experience delays, failures, and/or unfulfilled hopes or promises of aid. People are exhausted by now, worn by the extreme stress of ongoing recovery effort.

Behaviors
At this stage, survivors question governmental and organization aid, promises, intentions, service delivery, and achievements. The grim reality of just how long and difficult a road it will be back to “normal” presents itself. People concentrate on rebuilding their own individual lives and solving individual problems. The feeling of “shared community” often is lost. Both community leaders and organizations have a role here in disseminating correct information and helping counteract misinformation.

Important resources
Many of the outside organizations that were active at previous phases now pull out. Local agencies may be shown to be quite weak without the outside aid, and alternative sources of funding and assistance need to be explored by the community — and possibly by individual families as well.

Lasting for several years following the disaster, this is the long-term phase of disaster recovery. It may proceed at a glacial pace and is probably not supremely interesting to the media (until anniversary days of the event, when follow-up media reports are prepared).

Emotions
The emotions that appear here can vary widely according to (1) the status (emotional and financial) of survivors, (2) the manner in which previous stages were handled, and (3) the actual level of resources that have come available: more resources equals less survivor stress, and the converse is also true. Survivors realize that they are ultimately responsible for solving the problems of their lives. If recovery efforts are visible, the community — and through that the individuals in it — achieve a sense of being empowered that fuels further recovery. If community efforts toward recovery are not visible, individuals are more at risk for succumbing to PTSD and other serious mental and physical un-wellness.

Behaviors
Mostly, the behaviors seen at the Reconstruction phase are those of self-responsibility. In the best case scenario, individuals and families have assumed control of their own recovery, reaffirming belief in their capabilities and capacity to recover. If things have been mishandled all along, and/or there are few resources available for re-construction, behaviors will tend to be more dysfunctional: the apathy of depression may be seen instead of focused movement towards re-establishment of “normal”.

Important resources
At the last phase of recovery here, the people of the community and the groups who have a long-term investment in it are the crucial components.

This blog was adapted from resources from Episcopal Relief & Development, the “Psychological First Aid” Mental Health Academy course, and personal experiences following both a mass shooting and Hurricane Harvey.