A New Beginning for Trinity, Abbeville 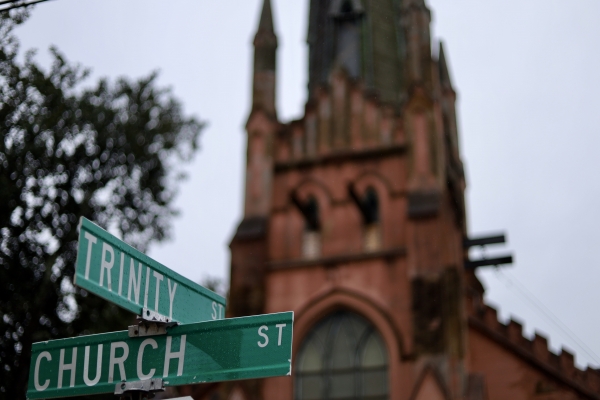 Parishioners and neighbors shared this greeting with each other as Trinity, Abbeville, worshipped again in its historic church building on Sunday, October 25, 2020. The building had been closed since 2016 due to safety concerns, including fears that the 125-foot-tall steeple could collapse. The last worship service in the building was Christmas Eve, 2016.

In the four-year interim, Trinity first worshipped at Sacred Heart Roman Catholic Church for more than a year, and then began worshipping in Trinity's parish house. Since the onset of the pandemic, the congregation has worshipped outside on the church lawn.

The Rev. Ken Tucker, the 25th Rector of Trinity, spoke to the gathered congregation following Sunday's service. "This has always been a place of God's presence," he said. "People are drawn to this space because they can feel God's presence here."

An Abbeville resident walking by the church shared the same sentiment. "I've lived here for several years and never been inside this building, but I can feel God here," he said. "I'm thankful to see the work being done."


Trinity's founding dates to 1842. The cornerstone of the present building was laid on June 27, 1859, and thick masonry walls were assembled of handmade bricks to support a soaring spire. The church was consecrated by Bishop Thomas F. Davis on November 4, 1860, just two days before Abraham Lincoln was elected President of the United States.

On the day of the consecration, an account of the ceremony in The Abbeville Press didn’t hint at a coming conflict. The church was “crowded to its utmost capacity,” according to the 1860 article, and the structure was declared “one of the handsomest edifices in the upper country.”

“On either hand are the large Gothic windows of stained glass, through which the dim, religious light falls in rays of many a fantastic hue,” it read.

The church houses the second-largest collection of windows made by William Gibson, known as the “father of glass painting” in America. Gibson had one of the earliest American glass painting businesses.

The sanctuary’s organ also came from a Charleston maker, John Baker. Only three of his organs still exist. The others are about 40 miles away in Edgefield, and in New York. None of them work — at least for now. Repairing Trinity's Baker organ is part of the long-term restoration plan.