A Call To Prayer For An End To Gun Violence 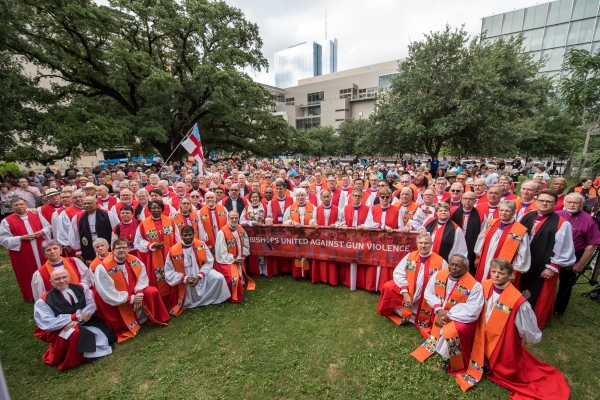 This weekend, faith communities, civic organizations, and non-profit partners are joining together in the Wear Orange campaign for National Gun Violence Awareness Day (Friday, June 7). Bishops United Against Gun Violence, of which I am a member, is one of those groups. I invite all within the Episcopal Church in Upper South Carolina to join me in prayer for an end to gun violence in our communities.

Across South Carolina, we know well the impact that gun violence has in our houses of worship, schools, neighborhoods, and homes. Many of us have and could share a story of how our lives have been impacted by gun violence.

This Sunday, June 9, marks the 91st anniversary of the martyrdom of William Alexander Guerry, the Eighth Bishop of the Diocese of South Carolina. Bishop Guerry was shot and killed by a priest who had attacked the bishop’s position on advancing racial equality in South Carolina. On June 21, we will commemorate the fourth anniversary of the shooting at Mother Emmanuel AME Church in Charleston, when nine churchgoers were murdered at their weekly Bible study.

Nearly 900 souls were lost to gun violence in our state in 2017, the latest year for which the Centers for Disease Control has published statistics. That is nearly 900 mothers, fathers, sons, daughters, partners, friends, and children of God who are no longer with us.

As we gather in worship this Sunday, we will hear Jesus’ promise of peace in the Gospel according to John (John 14:8-17,25-27). “Peace I leave with you; my peace I give to you. I do not give to you as the world gives. Do not let your hearts be troubled, and do not let them be afraid.”

I urge you join me in prayer this weekend—for an end to the epidemic of gun violence that plagues our nation, for reconciliation, for healing. Pray for the peace that only Jesus Christ can provide.

Learn more about the life and martyrdom of Bishop Guerry here:
http://www.episcopalchurchsc.org/bishop-guerry.html

The Wear Orange movement began in 2013 after Hadiya Pendleton, a 15-year-old high school student, was shot to death on the south side of Chicago. Her friends asked people to honor Pendleton by wearing orange — the color hunters choose for safety — on her birthday. Their cause has been taken up by groups around the country.