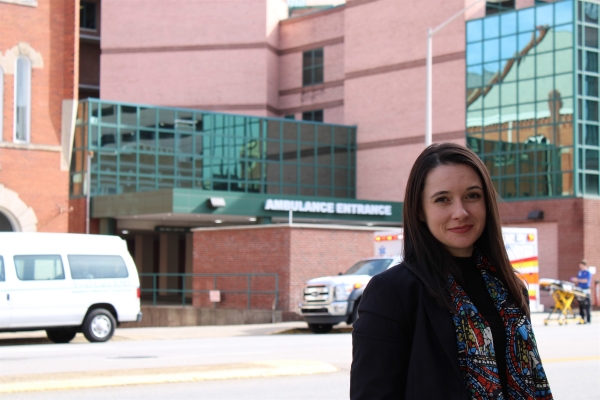 A gift of $15,000 has been made by St. Martin’s-in-the-Fields Episcopal Church to RIP Medical Debt, which will enable up to $1.5 million in hospital medical debt to be forgiven in Richland and surrounding counties.

“In the Old Testament, there is the idea connected to the Jubliee year, where every seven years, slaves are freed and debt is forgiven and it is like a big party (Deuteronomy 15),” said Caitlyn Darnell, director of Outreach at St. Martin’s (pictured right), a 700-member Episcopal parish located in Forest Acres. “We worship a God who died on a cross to forgive, so as followers of that God, it is our call to forgive and to forgive seven-fold.”

The RIP Medical debt program, based in Rye, N.Y., and founded in 2014 by two former debt collection executives, takes donations from donors to buy large bundles of medical debt with no tax consequences to the donor or the recipient. Every $1 donated purchases $100 in debt. RIP buys debts of the neediest people in a community, using federal poverty levels as a guideline. Often the gift not only relieves the debt but also clears a family’s credit report, allowing them to move forward with their lives.

A debt might belong to a single mother who finds herself drowning in medical bills after one of her children suffers something as common as an appendicitis. Or two working parents who experience complications during the birth of on one of their children. Each scenario can lead to thousands of dollars in unexpected medical debt -- even when families have health insurance.

“So, when I learned about this organization, I knew it was a no-brainer,” Darnell said. “Of course, this is what the Church should be doing.”

The process involving St. Martin’s donation will involve several months of negotiations by RIP with local hospital systems. After the negotiations are complete, individuals whose debt has been forgiven will be notified with a letter from RIP, including that the debt was forgiven by a donation from St. Martin’s. The parish plans to celebrate with a party when the process is complete, Darnell said.