Regina Ratterree honored with Order of the Palmetto award 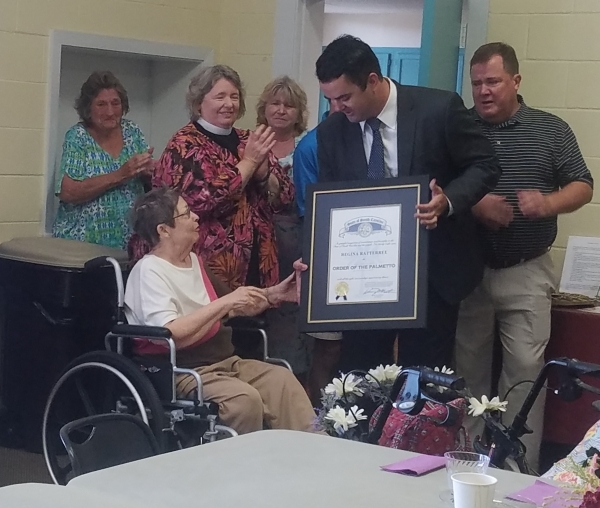 Regina Ratterree, a long-time parishioner at All Saints’, Cayce, recently was awarded the Order of the Palmetto, the highest civilian honor given by the Governor of South Carolina. Rep. Micah Caskey, who represents the 89th District in the South Carolina House of Representatives, presented the honor to Ratterree during a ceremony at All Saints’ on Sunday, Sept. 29.

Ratterree has been a vital, active participant in the Episcopal Diocese of Upper South Carolina, most recently serving as secretary of Diocesan Convention. She has served as President the EDUSC Episcopal Church Women, Diocesan United Thank Offering Coordinator, and as a member of Diocesan Executive Council, Standing Committee, and the Voorhees College Board of Trustees. In 2015 she was recognized by the EDUSC’s ECW as the Triennial Distinguished Woman.

Beyond the diocese, she has served the larger church in several important ways. She has been a delegate to The Episcopal Church’s General Convention, a member of the Committee for Provincial and National Concerns, national president and vice president of the United Thank Offering, and a member of the Province IV Executive Committee.

Ratterree was raised in Rock Hill, S.C., and graduated from Wofford College (now University). She and her late husband, Julian, moved to Columbia and began attending All Saints’. Regina has served on the vestry many times, including four terms as Senior Warden. She worked as the State Network Administrator for the SC Employment Security Commission and was honored by the SC Association of Workforce Professionals by receiving the Employee Performance Award in 2006.

"I cannot think of anyone more deserving of the honor of the Order of the Palmetto. She has served this state with exemplary distinction for many, many years and I am profoundly grateful to know her," Bishop Waldo said.