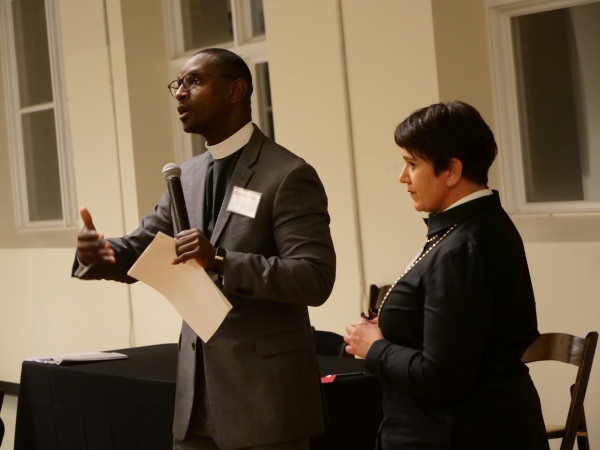 Starting a conversation about racism and hatred in South Carolina is a daunting task, so how do people of faith go about confronting hate when it appears in our pews and in our classrooms?

The dialogue was led by two Charleston pastors whose churches – one historically black, one historically white – have been next-door neighbors since just after the Civil War. Their members have come together for a weekly book study in the four years since a 21-year-old white supremacist murdered nine African-Americans during a prayer service at the Emanuel AME Church – known affectionately as “Mother Emanuel” – in downtown Charleston.


The Rev. Dr. Kylon Middleton, senior pastor of Mt. Zion AME Church, and the Rev. Callie Walpole, vicar of Grace Episcopal Church, have led the effort to deepen relationships between Grace, Mt. Zion and their communities. Their work serves as a model for congregations looking to create space for difficult conversations.

The pastors shared how their Tuesday Book Study model works and led a dialogue on the church's response to hatred and violence.

“Many of us live on the same streets, but we have had two very different experiences,” Rev. Middleton said. “Through this book study, we are able to move to a place of at least acknowledgment of people’s lived experiences and awareness of the depth of individuals’ journeys and experiences.
“We are certainly not trying to convince or convert people, but just trying to inform individuals of our unique experience so that we could move to a place of empathy.”

Rev. Middleton said he and Rev. Walpole agreed that the Holy Spirit had drawn the next-door churches into an “intentionality of coming together.”

“Every week is not flowery and easy,” he said. “Some of our conversations are very tense, because to really understand, you have to be willing to hear certain things. And even in hearing, you have to listen.

“So on both sides, there is give and take, and we have to begin to feel one another and truly learn what it’s like to be in somebody else’s shoes.”

A look at just a few of the “deep, hard-hitting, gripping, riveting” works the group has studied reflect the seriousness of their effort:

“Sometimes when you start talking about race relations or your personal experiences as it relates to discrimination or the lack thereof, tensions immediately are evident and emotions take over because no one wants to be seen as racist and no one wants to be perceived as treating someone other than what their dignity affords them,” Rev. Middleton said.

“Most times we go directly into shut-down mode – argument, defensiveness and shutting down.”

Rev. Walpole spoke of the importance of relationship – especially between people whose experiences may have been vastly different in spite of a broadly shared history.

“Any relationship that’s worthwhile is going to require hard work,” she said. “And so there is this sense that the mutual respect and admiration and affection that we have for each other is authentic. We’re not feigning it at all. It’s real. We actually do care about each other.”

Hicks’ book “Dignity” had a powerful impact on Rev. Walpole’s experience with the book study.

“Wars begin when people’s dignity is not valued,” she said, “when it is disregarded that we each have an inherent dignity as human beings, as creatures created in the image and likeness of God.

“How vital it is to be aware of not violating the dignity of another.”

The Mother Emanuel shootings, Rev. Walpole said, brought to the surface that uncomfortable shared-yet-somehow-not-shared experience for many in both churches.

“But we’re not in there to try to judge and convince others to come around to our way of thinking. We are all on this journey together. Some of us may be at different points along the journey – not farther along necessarily, or more enlightened – but we are all at different points, and everybody’s journey needs to be honored.”

The Fellowship of South Carolina Bishops closed the dialogue by encouraging those in attendance to launch their own versions of the Tuesday Book Study that has brought together the congregations of Grace Episcopal and Mt. Zion AME in recent years.

Anyone interested in starting a book study is encouraged to contact the Rev. Susan Heath, the statewide coordinator of the bishops' initiative, at [email protected].